WHO WAS WITH US

Last July, Kath introduced Elen to two dear friends, Heather and Aubrey Thonvold. Somehow, the topic of Bentleyville came up and it turned out that Kath was the only one who had never been. We started planning a road trip for December. As we started talking about getting married, it seemed perfect to do it at Bentleyville. Heather, a chaplain co-worker of Kath’s, would officiate. Aubrey, ML, and our friend, Kristina, were there, too. Aubrey took photos all night, so she’s not in any of them!

While we chose to keep the ceremony small, we carried each of you with us. We’re so very grateful that you’re part of our lives.

Elen, ML, Kath, Heather, Kristina (and Aubrey behind the camera)

We decided to get married in Duluth, Minnesota, on the shore of Lake Superior which is an important place to each of us. Kath loves being on the water and hadn’t visited Lake Superior in many years. Elen spent most of four years studying yoga therapy in Duluth and the city became a second home to her.

Our pre-wedding dinner was at the home of our sweet friend, ML Sather, who cooked us a fantastic meal. ML and Elen met in 2015, when Elen started her training. She stayed at ML’s house during her monthly trips to school and so much appreciated ML and her late husband, Jim’s, hospitality and friendship. Elen calls ML her “Duluth Mom.”

Thank you, ML, for your generosity in hosting all of us and starting our evening with such a beautiful experience.

ML gifted each of us with a heart-shaped Lake Superior rock from Brighton Beach. Brighton is one of Elen’s favorite spots in Duluth, having spent hours contemplating homework and life sitting on its shores. We visited Brighton during our hiking trip to Duluth last September.

We wanted to wear something that matched and we wanted to give a gift to our guests. We both LOVE blinky Christmas lights. Getting married at one of the largest Christmas light displays in the country wasn’t enough. We also bought Bentleyville blinky hat lights for ourselves and our guests. (Isn’t that better than matching bridesmaid dresses and tuxedos?)

Bentleyville is America’s largest free walk through lighting display with 5 million lights in a 20-acre park situated on the shores of Lake Superior. How could we not choose this as our wedding location?

We didn’t want to draw attention to ourselves because we wanted to tell you all about the wedding in our own time and in our own way. We were concerned the wedding would show up in the Duluth newspaper and hit the newswire. We inconspicuously walked through the park, scouting out our ceremony location the entire time.

One of the things we loved about Bentleyville were the characters we got to hug and pose with for photos. 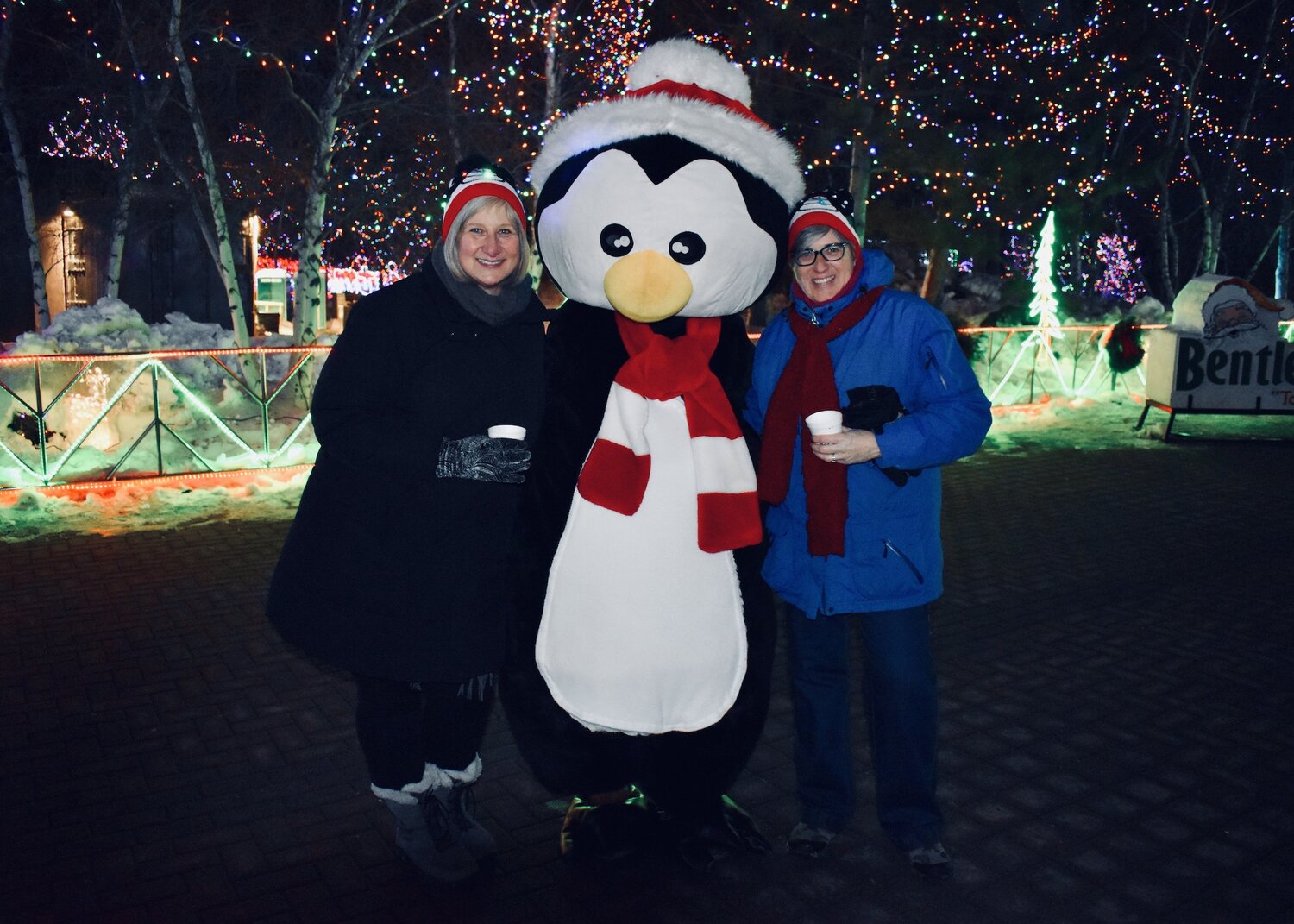 Bentleyville is a non-profit organization. Before opening for the season, they ask for donations. In exchange, donors have the option of adding someone’s name to either the Nice or Naughty list.

Elen was more than happy to add Kath’s name to a list. Except, when we found the lists at Bentleyville, she couldn’t remember if she used the nice Nice list (to be kind) or the Naughty list (because that’s more accurate.) We all searched the numerous lists and then Kath found her name right where it belongs. Doesn’t she look proud?

Here we are, trying to get on her good side so she’ll put in a positive word with the Big Guy. Although, as previously noted, Santa already made his mind up about Kath. When Mrs Claus needed help opening a box of candy canes, Kath whipped out her handy pocket knife. We’re hoping that increases her chances of being on the other list next Christmas.

“Welcome friends, we gather here today beneath thousands of joyous blinking lights to celebrate the love and commitment between Kath and Elen.”

We were married under one of many light canopies so that the little laser lights would sparkle down on us. It was magical.

We heard Christmas music the entire night. It wasn’t until Kath finished her vows and Elen was just starting when “I’m Gettin’ Nuttin’ for Christmas” started playing. In addition to just learning she was put on the Naughty list, Kath loves this song. She just learned it a couple of years ago and had been singing it for about a week before the wedding. It started to play, Kath went into cry-laughing, and everything took a pause until the song ended. It was perfect!

Elen sort of got to finish her vows but not really. Honestly, how do you recover from the cry-laugh? Reverend Heather was patient with us and wrapped up the ceremony with humor and grace.

“Source of life and love, we stand before you in thanksgiving for the commitment Kath and Elen have made to each other today. May you continue to invite Elen and Kath to live into beginnings, to make a beginning, to be a beginning, so that they may not just grow old, but grow new each day of this wild, amazing life, you call them to live with one another. Amen.”

How we intend to live our life together:

Wherever you go, I will go,

Wherever you dwell, I will dwell;

Your people will be my people,

And your God will be my God.

Because it’s Duluth in the winter, we were married in an ice storm. Good thing we like to travel with flasks. Bailey’s Irish Cream for Kath, Bourbon for Elen.

Goodbye for now, Bentleyville. Thanks for being good to us. We think you’ll be an excellent destination for our anniversary. Please try to arrange an ice storm-free visit next year.

“My friends, it is with great joy that by the power vested in me by the state of Minnesota and as an ordained minister in the Christian Church (Disciples of Christ) that I now pronounce you married.”

Heather, ML and Aubrey signed. (Again, no picture of Aubrey!)

Kath wears a Claddagh ring in honor of her Irish heritage. She gave Elen one to wear back in June 2019 when they each took out-of-town trips (Baltimore for Kath, Finland for Elen.) It was the perfect choice for our wedding rings.

The Claddagh ring represents love (the heart), loyalty (the crown), and friendship (the two hands.) We vow these three things to each other.

Here are our rings and a couple more 2019 pictures of our friendship.

2019 was quite a year of surprise and wonder for us. We look forward to many more, filled with cry-laughing and time with friends and family. We hope you’ll toast us with your favorite beverage, as we’ve toasted you with ours. You mean the world to us.

Thank you to Kristina for arranging our post-ceremony drinks and dessert.